Philadelphia Personal Injury Lawyer    /    How Can You Tell Who Hit Who in a Car Accident?

How Can You Tell Who Hit Who in a Car Accident? 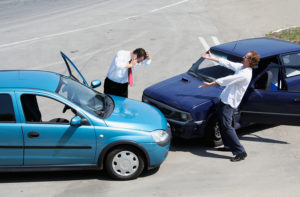 The Pennsylvania Department of Transportation (PennDOT) reported 89,116 car accidents on our state’s roads last year—about 244 every day. Of these, 603 were fatal and 39,319 caused an injury.

If you or a loved one have been in a car accident, it’s important to know who was at fault. A driver who hit another car could be negligent, and thus liable for injuries and deaths caused by the negligence. That means the negligent driver’s insurance company should pay you damages for injuries and harm caused by the accident. And, if the insurance company does not offer fair compensation for those injuries, you may be eligible to file a personal injury claim to achieve justice.

But the causes of car accidents can be complex. Questions may arise about who hit who that renders the determination of fault in a car accident difficult. You may not remember the crash or the seconds preceding it. Accidents can have underlying causes that take investigating to discover. Sometimes, a car may hit an obstacle or a bicyclist or pedestrian in a manner that causes a chain reaction of collisions. Traffic jams can occasionally lead to accidents in which several cars collide with each other. In all these cases, how can you tell who hit who?

In addition, common assumptions about the causes of traffic accidents do not always hold true. We almost always take for granted that the driver of the trailing vehicle causes a rear-end collision, for instance, even though that is not always the case. Lawyers for car accident victims can never ignore that a rear end collision can also occur when the driver of the lead car backs into the trailing car.

Fortunately, there are many ways to find out the answer to the question who hit who? Let’s review those, and then discuss Pennsylvania laws on car insurance and fault.

Methods of Determining Who Hit Who

Drivers involved in a car accident must report any accident that causes injury or death to the nearest police department right away. It’s the law. If a driver is not able (because of injury or other incapacitation) to make a timely report, then a passenger should do it. Drivers should also summon police to an accident scene whenever damage has made a car impossible to drive, regardless of whether there were injuries or fatalities.

At the scene, the police conduct a preliminary investigation of the causes of an accident. They look for clues on the road. They examine the vehicles themselves. The extent of damage, the point and angle of impact, the road conditions, and the location where the vehicle(s) ended up after a collision can all point to one or more likely causes.

Police will also attempt to determine whether drivers involved in an accident broke any traffic or other laws. Did the other driver run a red light, for example? Did one driver merge without checking to see if there were cars in the other lane? Was either driver under the influence of drugs or alcohol? A legal violation could point to the cause of an accident.

In conducting their investigation, police also seek to talk to drivers, passengers, and eyewitnesses. It is important for anyone interviewed by the police to give accurate information, but not to make assumptions about who might have been at fault.

Upon concluding an investigation, the police write a report that collects and presents a wide range of relevant information about the accident, and to the extent possible, offers the police investigator’s conclusion about who-hit-who.

If no one has been injured or killed, you should still report the accident to local police by filing a written report within five days. This is also the law. In addition, not all injuries are immediately apparent. If you don’t realize you are injured at the time but develop symptoms later, your report of the accident can provide a valuable record of what occurred.

Although the police will likely talk to any witnesses, nothing stops you or your lawyer from doing so as well. The police report may list their names, but you can also try to collect their contact information at the accident scene. Eyewitness accounts can prove valuable in piecing together who-hit-who in a car accident. The sooner you speak with a witness and record their recollections the better, because memories can fade.

Pictures From the Scene

These days, many people carry a smartphone. If you have a smartphone or a camera with you at the scene of the accident, use it to take pictures. To paraphrase the old saying, a picture is worth a thousand words about who-hit-who.

It’s a good idea to take pictures of your car, both inside and out. Take special care to photograph the point of impact on both vehicles up-close and at a distance. Even if the information captured in these pictures does not mean much to you, a car accident reconstruction expert may find them helpful in piecing together how the accident happened. The more pictures the better. Be over-inclusive.

Take pictures of the broader accident scene as well. Try to capture the perspective of each driver in the moments before the accident. Photograph street signs, lane markings, and traffic lights. Capture roadside objects, barriers, and any visual obstructions. Do not forget to take pictures of the road surface, also, including any skid marks, road imperfections (such as potholes), spilled vehicle fluids, or wet/icy areas. All of these depictions of the accident scene can provide clues to who-hit-who.

Finally, take pictures of your injuries. Photos should not serve as the only proof of the harm the car accident did, but they can certainly help document the nature and extent of your injuries. They can be used to analyze who-hit-who by reflecting how your body moved in an accident, or which side of your body sustained injuries.

It is not just pictures of your injuries that can provide evidence about who and what caused the accident. Everyone in an accident should see a doctor as soon as possible, to obtain treatment. You should have a doctor examine you even if you don’t feel any symptoms of an injury. It’s all too possible to be injured in ways you don’t feel, such as a concussion, or to be injured in ways that will surface later, such as soft tissue injuries.

Medical personnel take notes on your injuries and your descriptions of how they occurred. These could be used as evidence later. In addition, if who hit who is disputed, doctor testimony about how your injuries were likely caused can help determine the truth.

Surveillance cameras are being used more and more in public places. While you cannot control whether the place where an accident happens will be covered by surveillance cameras, you should always check to see if a camera captured the collision. There is no better evidence of who-hit-who than a video of the accident itself.

In complicated accidents, it is sometimes necessary to hire a forensic analyst to conduct a complete evaluation of the available evidence. Experts can sift through photographs, police reports, witness statements, and medical records to determine the likely trajectory and speed of the cars, the point of impact, and, ultimately, who-hit-who.

Why Who Hit Who Matters

The issue of who hit who is important in Pennsylvania because in many circumstances, the driver of the car that did the hitting will have legal liability to anyone seriously injured in the collision. Usually, that driver will carry liability insurance that pays benefits to those the driver injured.

“Who hit who?” also matters because oftentimes the driver who did the hitting is not the only party with potential legal liability to those injured in a car accident. For example, when a commercial does the hitting, the vehicle’s owner and/or the driver’s employer may have legal liability for the resulting injuries under Pennsylvania law. Employers generally have legal responsibility for their employees’ conduct. They must also ensure their employees have safe vehicles to drive.

“Who hit who?” can also lead to liability on the part of the manufacturer of the car that did the hitting. If, for instance, it appears that one car hit another because the first car’s brakes failed, then the car’s maker could face strict liability under Pennsylvania’s product liability laws, which hold manufacturer’s liable for damages whenever a defect in a product makes it unreasonably dangerous to the general public.

In short, “Who hit who?” serves as a proxy for determining legal liability. The more precision with which a lawyer can answer that question, the better the lawyer’s chances of identifying all of the parties with potential legal liability to his or her client, and in turn, the higher the likelihood the client will recover the full amount of compensation the law allows.

Possible Damages in a Car Accident

In Pennsylvania, victims of a car accident can recover monetary compensation, known as damages, for injuries they sustained. Depending upon the nature and extent of their injuries, and on types of insurance coverage each driver carried (as to which, speak with a lawyer), injured accident victims may recover money to pay for:

In addition, accident victims may also have the right to seek compensation for so-called non-economic damages, including pain and suffering and harm an accident did to intimate relationships.

What if the Insurance Company Doesn’t Compensate Me Fairly?

Insurance companies whose insured drivers hit someone sometimes try to pay injured people less than they deserve. That is, unfortunately, the nature of the insurance business; the less money insurance companies pay in claims and benefits, the more money they can keep as profit.

So, sadly, insurance companies may use sneaky tactics to trick injured car accident victims into accepting far less compensation than they deserve. They may blame the victims for the accident. They may dispute the nature or extent of victims’ injuries. They may make quick and dirty settlement offers before victims have sought the advice of a lawyer, hoping that victims will need the cash and will be willing to give up valuable legal rights in return.

Attorneys also work with investigative teams and expert witnesses as appropriate from case-to-case. Sometimes proving to an insurance company who-hit-who in a car accident requires extensive research and pulling together pieces of evidence from multiple sources. Those are tasks at which lawyers excel.

How Long Do I Have to Bring a Personal Injury Suit?

In Pennsylvania, car accident victims generally have two years from the date of the accident to take legal action for damages. Failing to act within that time window will usually cause their legal rights to expire. With rare exceptions, there is no way to revive a case once it has expired. No matter how badly injured car accident victims are, failing to protect their legal rights through prompt action will leave them without any options.

If you have sustained injuries in a car accident and need help proving who-hit-who, do not make the mistake of sitting on your legal rights to recover substantial compensation for the harm done. Contact an experienced car accident lawyer as soon as possible to start the process of piecing together the evidence you will need to prove a case for damages.